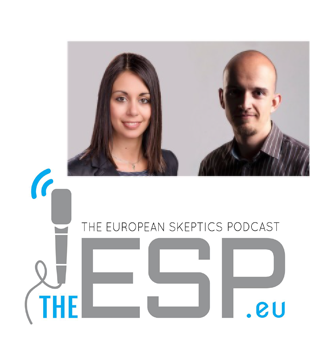 Featuring a short interview with Vassilena Valchanova and Liubomir Baburov, founders of the Bulgarian organisation called Ratio and organisers of Sofia Skeptics in the Pub.
Segments:
Intro; Greetings & Listener feedback; On this day; What’s on in Europe?; What’s hot in Europe?; Interview with Vassy and Liubo; Logical Fallacies; Really Wrong; Quote
Show notes:
00:00:00
INTRO music
00:00:28
Greetings & Listener feedback
00:06:44
On This Day: 9th March
Yuri Alekseyevich Gagarin (Russian: Ю́рий Алексе́евич Гага́рин, 9 March 1934 – 27 March 1968) was a Russian Soviet pilot and cosmonaut. He was the first human to journey into outer space when his Vostok spacecraft completed an orbit of the Earth on 12 April 1961.
“Looking at the earth from afar you realize it is too small for conflict and just big enough for co-operation.”
00:15:08
What’s on in Europe?

Please, check out the Skeptic Calendar of Events in Europe!

00:18:00
What’s Hot in Europe?
00:38:41
Interview with Vassilena Valchanova and Liubomir Baburov
01:04:05
Logical Fallacies – Fake precision fallacy
01:06:25
Really Wrong:
Update: Karolinska Institutet – for failing to protect the public from the actions of a quack
This week: Elke Sleurs, Belgian State Secretary for Equal Opportunities, for training police in retrieving “suppressed memories” using hypnosis
01:12:22
True of False
01:24:42
Quote
“We live in a world where unfortunately the distinction between true and false appears to become increasingly blurred by manipulation of facts, by exploitation of uncritical minds, and by the pollution of the language.”
/Arne Tiselius, Swedish biochemist, won Nobel Prize in Chemistry/
01:25:27
Outro
01:26:42
Out-takes
0 Comments
Inline Feedbacks
View all comments

This website uses cookies to improve your experience while you navigate through the website. Out of these, the cookies that are categorized as necessary are stored on your browser as they are essential for the working of basic functionalities of the website. We also use third-party cookies that help us analyze and understand how you use this website. These cookies will be stored in your browser only with your consent. You also have the option to opt-out of these cookies. But opting out of some of these cookies may affect your browsing experience.
Necessary Always Enabled
Necessary cookies are absolutely essential for the website to function properly. These cookies ensure basic functionalities and security features of the website, anonymously.
Functional
Functional cookies help to perform certain functionalities like sharing the content of the website on social media platforms, collect feedbacks, and other third-party features.
Performance
Performance cookies are used to understand and analyze the key performance indexes of the website which helps in delivering a better user experience for the visitors.
Analytics
Analytical cookies are used to understand how visitors interact with the website. These cookies help provide information on metrics the number of visitors, bounce rate, traffic source, etc.
Advertisement
Advertisement cookies are used to provide visitors with relevant ads and marketing campaigns. These cookies track visitors across websites and collect information to provide customized ads.
Others
Other uncategorized cookies are those that are being analyzed and have not been classified into a category as yet.
SAVE & ACCEPT
wpDiscuz