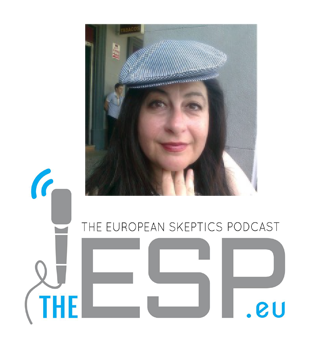 Featuring a short interview with Antonia de Oñate, CEO of the Spanish skeptical organisation Spanish Rational Alternative to Pseudoscience – Society for the Promotion of Critical Thinking (ARP-SAPC)
Segments:
Intro; Greetings & Listener feedback; On this day; What’s on in Europe?; What’s hot in Europe?; Interview with Vassy and Liubo; Logical Fallacies; Really Wrong; Quote
Show notes:
00:00:00
INTRO music
00:00:33
Greetings & Listener feedback
00:09:13
On This Day: 23rd March
Daniel Bovet (23 March 1907 – 8 April 1992), Swiss-born Italian pharmacologist who won the 1957 Nobel Prize in Physiology or Medicine.
He also led a study team which concluded that smoking of tobacco cigarettes increased users’ intelligence…
00:16:23
What’s on in Europe?
Please, check out the Skeptic Calendar of Events in Europe!
00:19:21
What’s Hot in Europe?
00:46:57
Interview with Antonia de Oñate
01:14:30
Logical Fallacies – False attribution (also known as argument from false authority). Appealing to an irrelevant, unqualified, unidentified, biased or fabricated source in support of an argument.
01:18:29
Brian Dunning – Crowdfunding for trip to Rationalist International Conference in Estonia
01:19:31
Really Wrong: Håkan Ericsson, coach for the Swedish national under-21 football team, for using HeartMath products.
01:25:19
Quote
“I would teach the world that science is the best way to understand the world, and that for any set of observations, there is only one correct explanation. Also, science is value-free, as it explains the world as it is. Ethical issues arise only when science is applied to technology – from medicine to industry.”
/Lewis Wolpert, British developmental biologist, author, and broadcaster/
01:26:34
Outro
01:27:49
Out-takes
1 Comment
Oldest
Newest Most Voted
Inline Feedbacks
View all comments
Ferose Khan

It took that long for a number of reasons, primarily that it does not appear to have been a voluntary settlement, that is, ORI after going thru the required processes, administratively sanctioned Deb. If “respondents,” as they are called, fail to settle, ORI must go through an HHS Office of General Counsel attorney to get a charging letter. This office has been described to be as unbelievably slow, unresponsive and ineffective, despite being paid huge sums out of ORI’s budget. It should also be noted that the most ORI ever does is a 7-year exclusion. I am not sure when… Read more »