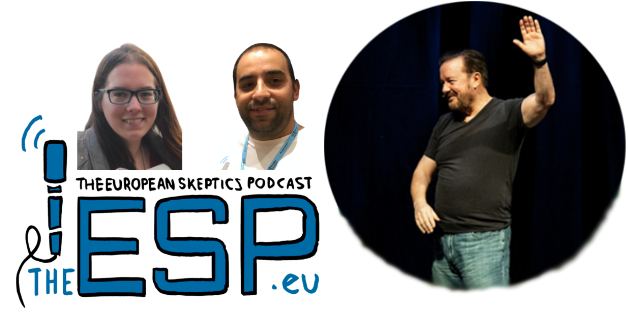 What is humour allowed to do?

Despite us still missing a cheery Hejsan Hejsan, we are back with a new episode! We talk about Nikil Mukerji (interviewed in Episode 252), who wrote a paper about Bullshit with his colleague Adriano Mannino. If you want to meet skeptics like Nikil Mukerji, then European Skeptics Congress in Vienna is the right place for you. Early bird prices still apply until the 30th of June! Another ESC we talk about is the Eurovision Song Contest, which will not take place in Ukraine in 2023 after all.

This week’s TWISH celebrates Ricky Gervais’ birthday on the 25th of June 1961. András and Annika discuss what jokes and humour can do to not discriminate against minorities without being censored and hence talk about the comedian’s jokes in particular. (Picture credit: Wikimedia Commons; Raph_PH 2019).

We have criticized Prince Charles before. For his blatant promotion of So Called Alternative Medicine, he receives this week’s prize for being  Really Wrong.